Click on the below link to access the CLRG Covid Relief and Recovery Fund Application Form. Contact This email address is being protected from spambots. You need JavaScript enabled to view it. for further information

Information relating to refund or entries and hotel deposits 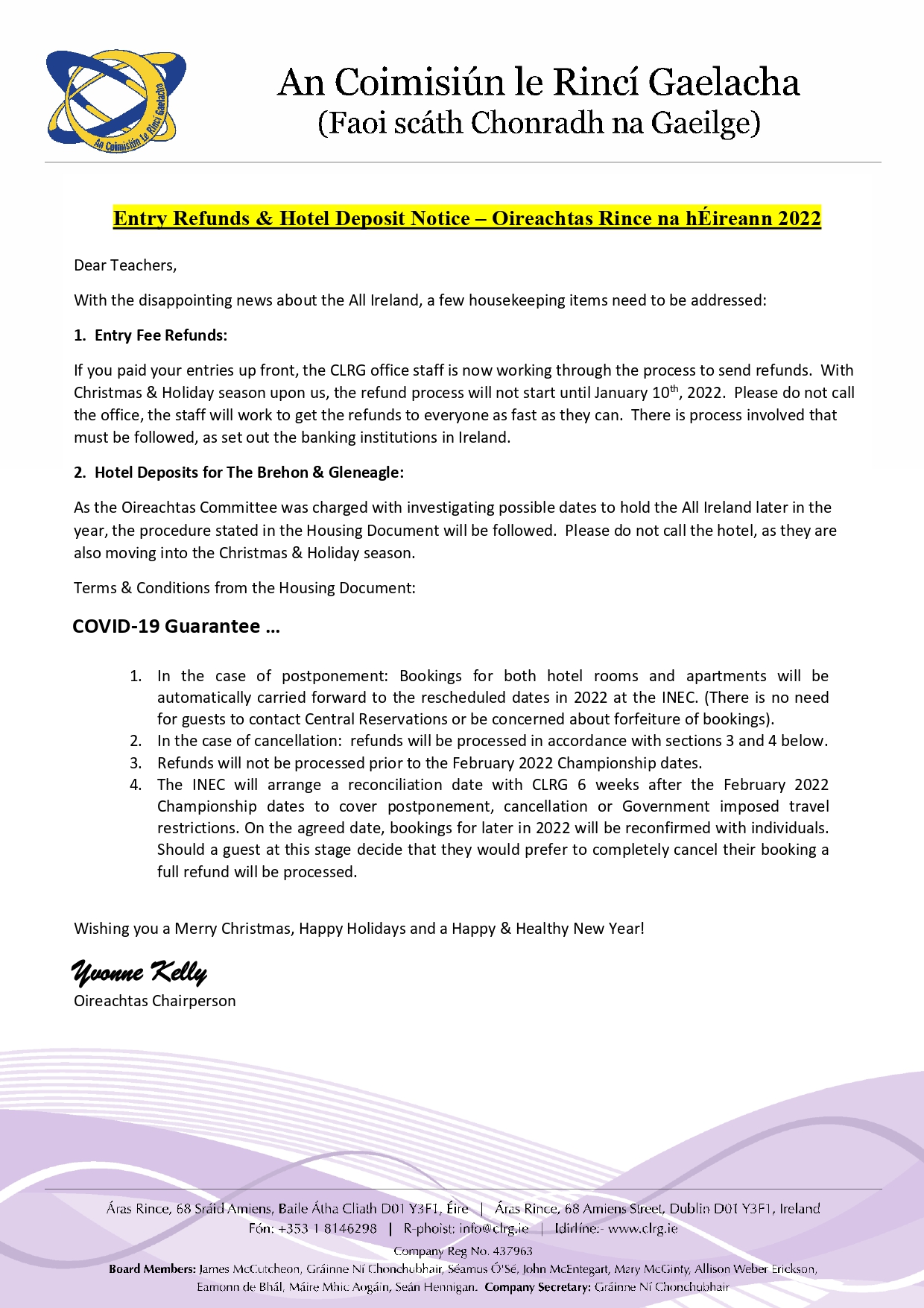 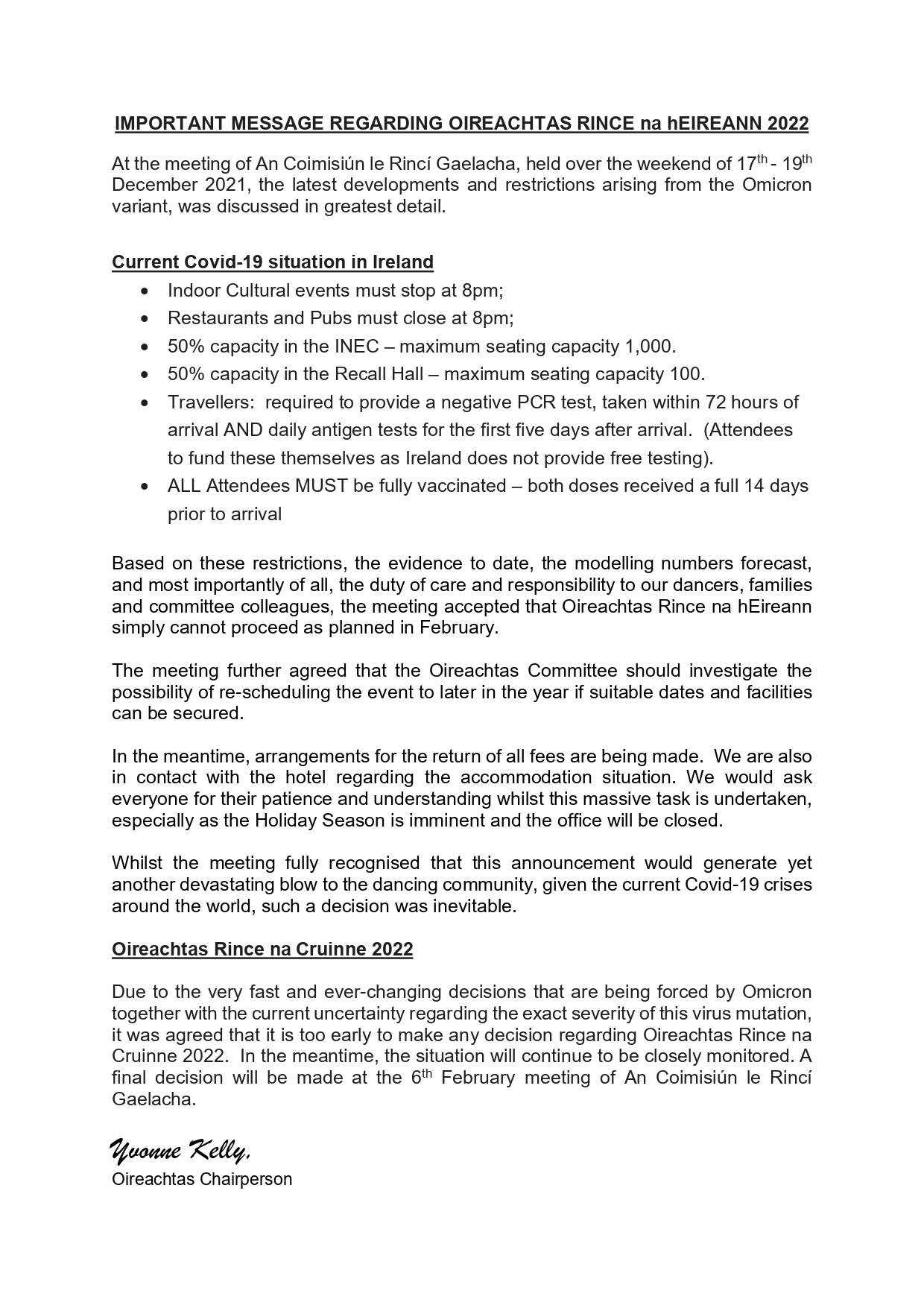 Yesterday, Monday, 8th November, I attended a beautiful funeral service to celebrate the wonderful life of a dear friend, Anthony Nolan. To attempt to sum up the achievements of such a great man in a few sentences is nigh impossible, but in our own hearts and minds we will all have our own more poignant memories and thoughts.

When thinking of Tony and his impact on the dancing fraternity, there is only one word that comes to mind. LEGENDARY.

Whenever you entered a venue, hotel, or even may I say, Halla B at the World Championships and you heard any laughter, you always knew that Tony would be in the middle of that group sharing a story, imparting a favourite memory or simply telling a joke. He himself lit up any room when he walked into it, with his broad beaming smile, twinkle of devilment in his eye,  commanding presence and of course Rose by his side.

But L also stands for legacy - an amazing gift that he has left to the people of his beloved city of Limerick.

A man who lead by example, a man ahead of his time, a man of vision. Whether teaching new beginners or guiding dancers to over 100 World Championship titles, he instilled in each, a pure and unbreakable love of dance and culture, an unshakable confidence, a steadfast belief in their own abilities. Life skills that remains with each of them to this day.

Whether he was teaching any of the thousands of dancers whose hearts he touched, engaged as a much sought after and esteemed adjudicator or officiating as an exemplary Examiner who encouraged and always had the wisest of words for any candidate, it was always done with that quiet, calm and knowledgeable voice which exuded charm and wisdom.

Three words automatically come to mind. Apart from being the greatest ever granddad to his beautiful grandchildren Aisling, Cahal, Fia, Alva-Rose and Shay, one also thinks of Greystones - the area in Limerick where Clann Ui Nuallain made a very active and welcome contribution to community life.

Of course nobody can think of Tony without the word Gentleman leaping to the fore. Both gentle in soul and demeanour, he certainly was the perfect gentleman with the kindest of words and welcoming smile for all. Moreover, he always kept his own thoughts to himself and only saw the good side in everyone. A wise man indeed!

As an examiner, having witnessed this myself, he always put each and every candidate at ease, so getting only the best performances from them.   A wonderful and rare talent.

Tony was a king amongst his peers, a leader, a fighter for fairness, an inspiration. He was a man of the finest personal qualities and highest moral principles.

Can only mean a dear, dear Dad to Niamh, Daire and Cian. I am sure Tony would look on this as his single greatest achievement in life.

But “D” also stands for Dance, one of Tony’s greatest passions in life. For over 80 years he was relentless in promoting our culture, dance and language, not only in Munster and Ireland, but as an ambassador all over the globe.

Which brings me on to “A” and An Coimisiun. Tony was a true and stalwart supporter of CLRG for well in excess of half a century. Naturally, he put his beliefs into action and held many positions within the organisation including years as the Cathaoirleach of Cúige Mumhan where he will be especially sorely missed.

Wherever Tony was, you would find Rose there by his side, so “R” can only stand for his beautiful Roisin, his confidant, his bride of over 60 years and the greatest love of his life. Together they built a dynasty, revered, admired and aspirational to people all over the world.

And Finally “Y”, which can only stand for one word:-

YES, the only word Tony would say if you went to him for help. He was simply the most generous, trusting and giving of men.

And yes Tony, hopefully we will all meet again at that greatest of Ceilis in Heaven.

Until then, this is not farewell or good bye, but merely “Au Revoir” my friend.

Sleep softly in the arms of the angels.

It is with regret that we announce the passing of Anthony (Tony) Nolan SDCRG.

An Coimisiún Le Rincí Gaelacha extends our deepest sympathy to his wife Rosaleen, daughter Niamh, sons Cian and Daire and to all his family and friends.

Funeral Arrangements can be viewed by clicking on the below link

We use cookies on our website. Some of them are essential for the operation of the site, while others help us to improve this site and the user experience (tracking cookies). You can decide for yourself whether you want to allow cookies or not. Please note that if you reject them, you may not be able to use all the functionalities of the site.